WHAT MARKETERS CAN LEARN FROM THE CHAMPIONS LEAGUE FINAL

It was a night of wonders as two English heavyweight football clubs met in the final match for the Champions League, marking only the second all-English finals match in the tournament’s 65 year-long history. When it was all over, Liverpool finished its incredible season by beating Tottenham Hotspur 2-0 and claiming an even greater prize than the Premier League title (which they narrowly missed out on, losing to Manchester City by a single point).

As a London-based company, excitement for the match at MiQ reached a fever pitch, with our excitement extending not just to the match but also the fans. While our team loyalties may have been divided, our passion for data was still a unifying factor, and so we couldn’t help ourselves when it came to analyzing the data of fans who watched, attended, and discussed the game, and thinking about what that might mean for advertisers.

The road to the finals

The chances of an all-English final looked pretty bleak after the first leg of the Champions League semifinals with Liverpool trailing Barcelona 3-0 and Tottenham having lost their home fixture to the dark horses Ajax. The mood was gloomy across the UK with disappointed fans taking to social media to share their opinions. It was hard for even the most ardent supporters of the clubs to remain positive, let alone think of a comeback.

But everything changed with the historic comebacks of both teams on the nights of May 7th and 8th, during the second leg of the semifinals. Following the comebacks, Twitter exploded with memes and reactions from ecstatic fans, totalling more than 300,000 social interactions and another 70,000 active discussion participants on Reddit.

The resulting hype for the final was intense, with an estimated global audience of between 380 and 400 million viewers, making it almost twice as big as the Super Bowl. That interest carried over to the streaming platform YouTube, where prior to the finals in Madrid more than 8m video views were recorded for finals-related content. In the week leading up to the finals, football fans spent an average of three to four hours reading content and history related to the match.

Despite the massive online interest for the event, there was still some uncertainty among the broadcasters around the size of the audiences who would actually tune in to watch the match live on TV. Last year only 53% of British football fans watched the World Cup live on a TV and overall TV ratings and viewership for large sporting events have been declining over the past few years. In particular, viewership for English football club matches has declined 30% during the past four years as audiences have changed how they interact with those events.

As more and more fans have turned to digital and streaming methods of watching the games, we’ve instead seen an ongoing increase in searches for streaming apps and services, which is accompanied by a 13% uptick in the week before major events such as the Champions League Final.

BT Sport has been at the front of this transition and this year broadcast the Champions League Final free through YouTube, the BT Sport app, and its affiliate Sky and Virgin networks. As a result, BT Sport’s brand perception improved by 7% prior to the finals and as a result of the announcement. Unfortunately, technical difficulties with the streaming broadcast led to fans being upset that the broadcast image was pixelated and blurred. As a result, consumer perception for BT Sport declined back to pre-announcement levels. 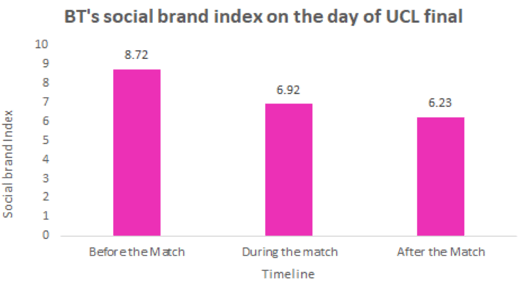 Knockouts are still a hit on TV

Despite the heavy adoption of online streaming services by sports audiences worldwide, TV still accounts for more than 70% of the total viewership and is a colossal opportunity for advertisers to reach the football audience at scale. On average, Champions League viewers watch more than an hour of the tournament finals, though the trend in recent years has seen that time decline. Though whether this is part of a larger trend or due to the combination of Real Madrid’s popularity and the fact that both the 2017 and 2018 finals were going into the second half, creating a more interesting matchup, is unclear.

Unlike Superbowl which is considered a premium event for advertisers in the US, with an advertising opportunity of around $360 million, UEFA reserves most of the advertising slots during the UCL final for it’s more committed sponsors who tend to remain with the league throughout the 32 team- tournament from the outset. This strategy means brands can build a longer engagement with soccer audiences, which is why it’s more important for brands to keep tabs on the changing TV behavior of the audience during the progression of the tournament.

This year, fans changed the channel during Champions League games almost twice as often, signaling a decrease in attention for the live content. This was accompanied by a 13% increase in viewership of video highlights and a 7% increase in searches for live scores, showing that overall interest remained steady while TV attention waned. 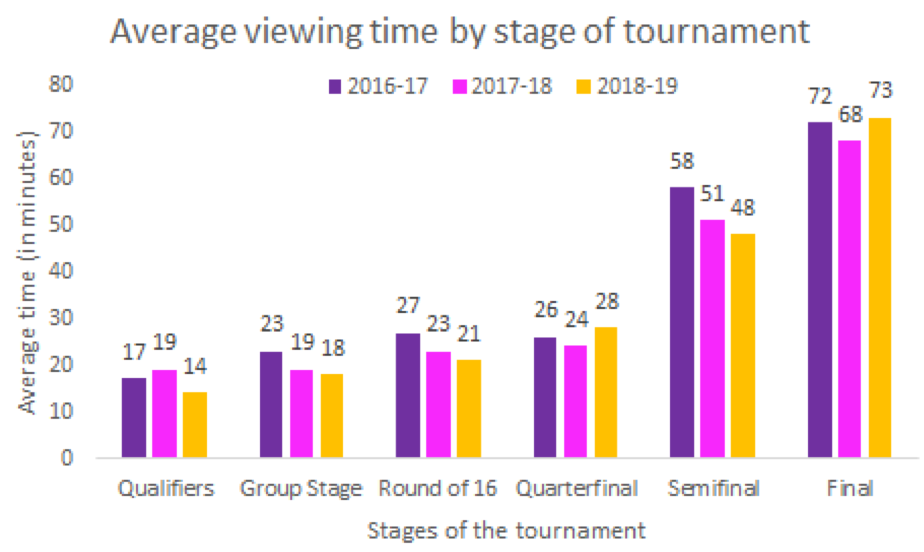 For advertisers, this signals a clear need for a shift in strategies. Hunger for Champions League content hasn’t shifted, but relying on TV as the medium for capturing eyeballs may no longer be the cornerstone strategy for brands looking to engage with European football fans. Advertisers need to think about viewers’ digital habits and how to reach fans who are either engaging with the Champions League online or who do not watch the commercials that air during the event.

The worldwide appeal of football is a double-edged sword for advertisers. While it gives advertisers a massive audience of targetable fans and enthusiasts, it also means that those fans come from all ages, genders, countries, and walks of life. As a result, campaigns that only consider this one aspect of their lives - their fandom - may fail to connect completely with a large swathe of fans.

One immediate way to segment Champions League fans is by country.

European online football fans are among the most engaged, with fans typically closely following more than one league on a regular basis. Though European football fans include fans of all genders and ages, the majority are male (70%) and tend to be between 18 and 34 years of age (Germany has the highest proportion of female football fans). Fans in this audience tend to have a more strategic outlook toward the game and show a passion for player statistics and strategic content online.

The American soccer audience has been growing over the past 20 years, though the sport’s following in the United States is still irregular. Online, American fans tend to be between 18 and 24 or over 45 and follow only a single league (typically either the English Premier League or La Liga), with an even mix of male and female fans. American soccer fans are more likely to be interested in the celebrity lifestyles of top stars in the sport. In the United States, Hispanic fans are a major area of focus. An estimated three out of four US Hispanics is a soccer fan, and Hispanic fans account for more than two-thirds of US soccer viewership.

Asian and Australian online football fans are the fastest-growing audience for European football leagues. While the Asian Champions League has struggled to gain popularity in Australia and Asia, popularity for the sport continues to improve, and many Asian fans follow either their favorite team - Manchester United - or their favorite player - Lionel Messi. Fans in this market have immense purchasing power and are likely to follow a specific team and its players both on and off the field. Among Asian fans, the Premier League is the primary foreign league of interest, particularly in Singapore and China.

Social activity around the final

The Champions League final was a major point of discussion on social media, generating over one million tweets in the leadup to the game and a 5x jump in Twitter activity on the day. As fans geared up for the game, their intensity spiked, particularly with excitement or pride around an all-English final. Going into the game, Liverpool were the clear fan favorites on Twitter, with more than 3x more activity around the team than Tottenham.

As the game went on, however, fans were disappointed with the lack of intensity from the two teams and the game’s anticlimactic ending, as well as the technical difficulties with the stream. As a result, sentiment for the event tended to become more negative as the match went on. The pre-match performance by Imagine Dragons, the controversial penalty in the first minute, and the post-match reactions of the players were the most-discussed topics among fans on Twitter during and after the event.

Social sentiment breakdown during the match

Battle of the sponsors

With more than 4.2bn football fans across 220 nations, the Champions League is a perfect platform for brands to reach a massive audience all keyed in for one event. For companies like Heineken and Pepsico that have been associated with the league for the past 20 years, sponsorship is a way of creating brand awareness and positive association across multiple nations. For brands like Sony, it’s an opportunity to launch and promote new products and features, which they did through the PlayStation F.C. app, developed in partnership with Electronic Arts to promote EA Sports FIFA 2019.

Planning for next year

Next year offers another double-dose of football, as we’ll see not just another annual UEFA Champions League Tournament, but also the international Euro 2020 football tournament as well as the 2020 Summer Olympics in Tokyo, putting the spotlight once again on national teams. As advertisers prepare, they should consider ways to segment their target audiences beyond just engagement with the sport and think about how they can build a portfolio of targeting strategies that reach multiple types of fans and have a plan for measuring the success of each.