Analyzing round two of the 2019 Democratic debate

Millions of Americans tuned in to watch the second round of the 2019 Democratic Debates last week, with 8.69 million viewers watching on Tuesday and 11.3 million viewers on Wednesday across TV and online outlets. Because we’re always interested in connecting traditional media viewing to digital activity, we analyzed a sample of 306,000 distinct households that watched the debates either night on an opted-in Vizio TV and combined it with digital profile and social data. That meant we could identify how people who watched the debate responded and gather some insights that political advertisers might learn from.

Here are our main findings.

More than half of viewers tuned in both nights

60% of viewing households watched the debates both nights, and 40% also tuned into either night of the first round of debates on an NBC network. If a viewer only chose a single day to tune in, they were 1.4x more likely to tune in the second day than the first.

Most viewers watched at least 15 minutes, but most topped out at 2 hours

Overall, most viewers spent between 15 and 90 minutes watching the debates, and nearly half tuned in for an hour or more. Viewers spent more time watching day two of the debates. 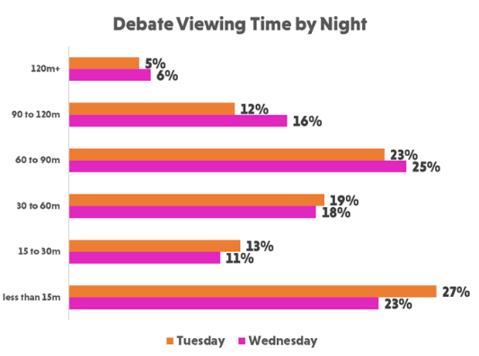 For political advertisers, the "60-120 minutes" engagement groups should be read as maximum engagement, not the much smaller 120+ minute viewing group, since the length of the debates stretches beyond prime time viewing on weeknights and have little additional policy. Watching them in full is likely to be more an activity for political bloggers and dedicated politics junkies rather than curious undecideds.

Given that we also saw an increase in viewership from day one to day two for the June debates, it’s likely the case that day two receiving more eyeballs is a consequence of structure rather than the candidates involved. That is, the first day sets up and acts as advertising for the second, driving additional engagement. Though it is worth noting that the Democratic front runner, Joe Biden, has been on day two both nights.

Viewers invested enough to watch both debates watched for longer periods of time - about 18 minutes longer, on average. 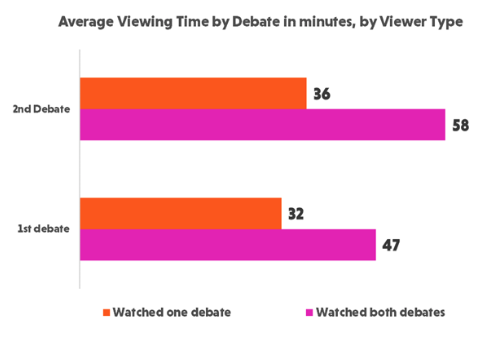 On average, debate viewers were most likely to have spent significant time watching Fox News in the prior 30 days, averaging 61 minutes of viewing time compared to only 45 minutes of MSNBC, despite the relative political leanings of each network. While this could potentially be due to “hate-watching,” it’s more likely an echo of the behavior we saw in our research last year, which showed a sizable audience who regularly consume liberal-branded media such as The Daily Show or Colbert but prefer Fox to MSNBC, while MSNBC viewers are a smaller but more dedicated piece of the pie. 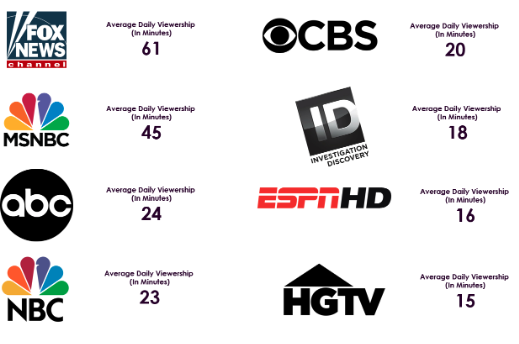 More than half a million viewers (576k) streamed the second round of the Democratic debates live and more than 1.2 million additional viewers watched the analysis of the debates on YouTube in the three days subsequent. Viewers streaming the debates watched for an average of 75 minutes, on par with television viewing. 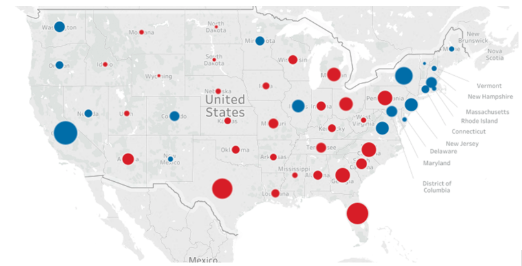 Note: States are colored according to their voting outcome in the 2016 presidential election

During the week of the debate, more than three million tweets and more than 700,000 Reddit posts were generated about the event, covering every possible topic that candidates would discuss. Nearly half of these (43%) occurred while the debates were being broadcast, with many containing real-time reactions to events in the debates. As viewership increased on day two, so did the volume and emotional intensity of social posts related to the debates. 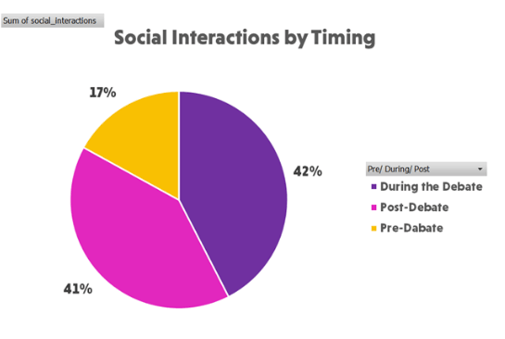 From a social media standpoint, the debate’s big winner appears to be former United States Housing and Urban Development secretary Julian Castro, who saw the largest positive change in perception following the second debate. In particular, his opening statement on healthcare and his willingness to go after Biden may have paid off, helping boost his sentiment scores following the debates. Although often third or fourth in polling among likely voters, social sentiment around Elizabeth Warren continues to be lukewarm, showing the largest swath of neutral content. 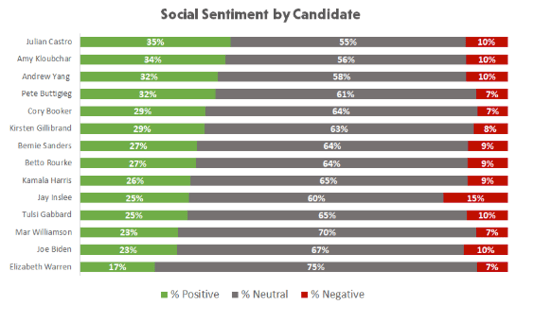 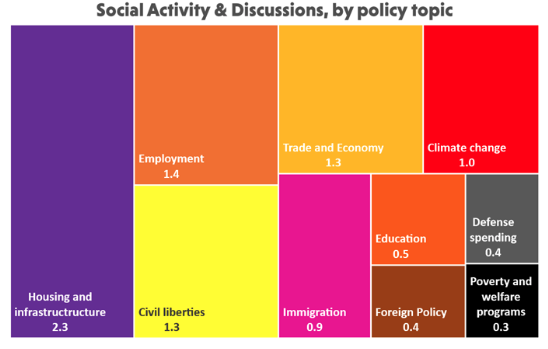 Digital activity during and after the debates

This being 2019, households watching the debates were also online throughout, browsing other content on multiple devices. Following the debates, 63% of viewers searched for content related to the debates online on news sites such as MSN.com or the NYTimes to read analysis of the debate. Roughly two-thirds of these searches (68%) were conducted on a desktop PC or laptop.

All in all, it’s worth remembering how relatively early in the primary season we are. In the 2016 presidential primary, the Democrats did not hold their first debate until October 2015. This time round, October 2019 will play host to the fourth debate, following a great winnowing down of the field -- only ten or so candidates are poised to qualify for the third debate in September, and we assume the thresholds for entry in terms of donors and poll standing will be even higher for the fourth.

But that doesn’t mean analysis of these debates is just interpreting signal noise. If the Democrats and CNN push ahead with this two-and-a-half to three hour format on weeknights starting around 8 PM EST (with a startling amount of pageantry baked into their opening ceremonies) then advertisers should look to target viewers after opening statements but before the night drags on too long -- somewhere in the +30 to +90 minute range.

Beyond that, one of the upsides to having so many of these is that they provide a lot of data points -- there were nine debates in the 2016 Democratic primary, and it seems reasonable to believe given the size of the field and the already-grueling schedule that this primary could play host to 15 or more.

For political advertisers, this is a significant boon. The more debates there are, the more data we’ll have, and the more accurate and comprehensive conclusions we can draw. Buckle up; this is going to be a long one