Who prevailed during the third round of the democratic debates

For the first time in the 2019 Democratic Primary season there was just a single night of debate with only ten candidates making the cut. As the ten qualified candidates took the stage in Houston, over 14 million Americans tuned to spectate the three and a half-hour long event broadcast on ABC.

The shift to broadcast proved a boon for those candidates sharing the stage. Viewership for the third round of debates was the highest to-date, with more than 12.9 million Americans tuning in to watch on ABC, and another 1.1 million watching on ABC’s Univision network. From Julian Castro’s viral ambush of Biden to Senator Kamala Harris’ continued attacks on Trump’s administration, the debate created a significant stir in social media and created opportunities for political advertisers to seize upon.

Front-runner Joe Biden continued to dominate speaking time at the debate, logging over 3,000 words over 17 minutes of airtime. Biden’s closest competitor, Senator Elizabeth Warren, came second in terms of both air time and polling, though she was the target of fewer direct attacks than Biden.

To better understand the content of the debates and how it might have impacted viewers and post-debate polling, MiQ analyzed the debate transcripts. Overall, we saw a 62% positive correlation between a candidate’s air time and the positive sentiment that candidate garnered in the opinion polls following the debate. This further increased to 72% after filtering out fillers and stop-words used by candidates during their speeches.

Analyzing the debate transcripts highlights the policy preferences and platforms of each candidate. Senators Bernie Sanders and Warren, and Joe Biden all devoted more than one fifth of their speaking time to healthcare, while civil rights and gun control were the dominant talking points for Senator Cory Booker and former House Representative Beto O’Rourke. Harris devoted the majority of her speaking time to criticizing the Trump administration and its policies. 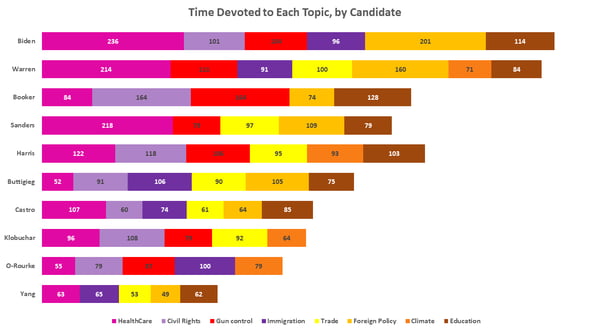 According to post-debate approval polls conducted by research firm IPSOS, Warren was the night’s biggest winner, seeing a nearly four-point jump in voter consideration following the debate. Pete Buttigieg also closed the gap between himself and the top of the pack with a 2.7% increase in consideration. These increases largely came from decreases for Biden, Sanders, and Harris, the latter of which saw the largest decline in voter consideration. Booker, Klobuchar, Yang, and O’Rourke all saw marginal increases or held steady. 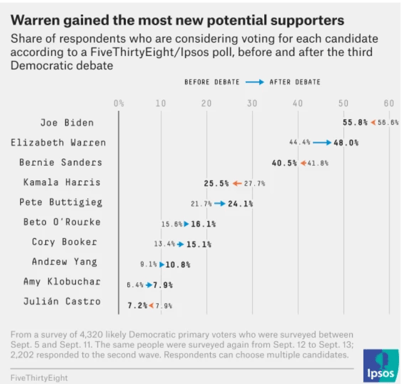 Discussion of the Democratic debates has continued to increase on social media as the primary season rolls on. Over 600,000 Twitter interactions using debate-related hashtags or keywords were observed over the course of the debate. During the debate, related tweet volume increased by six times, with most of the conversation centering around the moment Castro pointedly asked the former Vice President if he could remember the answer he’d given to a question minutes earlier, appearing to question Biden’s mental fitness for office.

Consistent with the theme of the debate, healthcare policies remained a major talking point on Twitter with more than 200,000 users discussing the different candidates’ positions. Gun control and civil rights issues followed behind, with foreign policy and trade bringing up the rear. 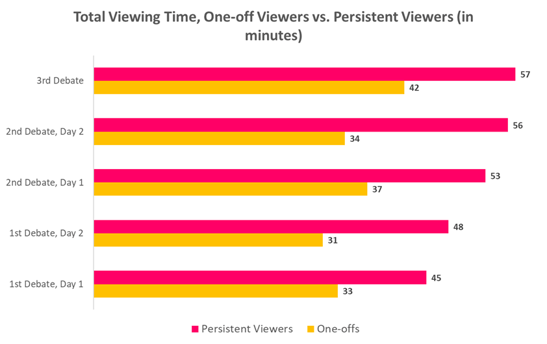 Households tuning into the third debate did so for around 55 minutes on average, and half of viewers watched for more than an hour. Viewers were also less likely to tune out within 5 minutes (4% less) when compared to the prior debates. For the households who did lose interest, Thursday Night Football was the most likely alternative with around 2.4% of households switching to the game during the debate and another 1.7% switching over to CBS News.

Activating against these audience

As we move deeper into the primary debates, engagement manifests not just as TV viewing but also online activity. Search interest around the debates this year has already surpassed that of the 2016 Democratic debates by a factor of seven.

Although viewership for the third debate was up, the single-night format acted as a dampener for digital engagement. Search activity around the third debate and its topics fell to almost one-fourth that of the first debate, including pre- and post-debate searches, which decreased by almost 60%. But this decline in the search activity was countered by an increase in social chatter, which increased by 13%.

Looking at a sample of 575,000 distinct households who watched the debate on a connected TV, we identified that only 0.8% were likely to be communal or public TVs. For the remainder, we can identify the other devices in those households and examine the potential digital reach for campaigns trying to target viewers of the debate.

On average, viewer devices generated six impression opportunities during the broadcast, though this varied based on geography and the number of devices in the household, and some generated as many as 78. Impression opportunities increased after the debate aired, meaning that political and advocacy advertisers should consider strategies that target viewers shortly after the debates have ended, when inventory is most likely to be available. 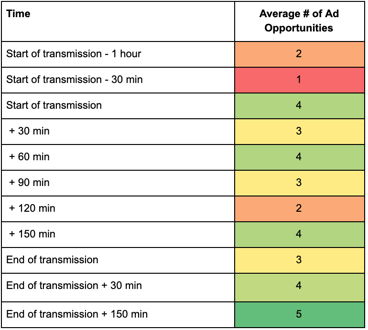 This reaffirms the need for political advertisers to come up with holistic yet agile marketing campaigns that can connect multiple channels, both to reach voters wherever they may be but also to make sure that the message is seen. By connecting consumer profiles and messaging across these channels, advertisers can make sure their messaging reaches the right voters in a way that will create the biggest impact for their campaigns.

If you're interested in finding out more about how MiQ can leverage TV data to help power your political campaigns, contact us to schedule a demo.